Jari-Matti Latvala was the surprise leader on Saturday night after an action-packed day on the snow. Thierry Neuville held a comfortable advantage before ripping the left front wheel from his Hyundai i20 Coupe after going off the road and striking a drainage culvert in the short special stage at Karlstad trotting track.

His demise left the Finn with a slender 3.8sec lead in his Toyota Yaris over the rapidly closing Ott Tänak with just Sunday’s short finale remaining. World champion Sébastien Ogier was only 12.8sec further back in third.

Having pulled clear of Latvala late on Friday, Neuville measured his pace on the snow and ice-covered forest roads and his lead hovered around 30sec. Victory in the penultimate speed test increased his advantage to 43.3sec before his error. Neuville said: “There are really no words that convey how I feel right now. It was a very sudden end to what had been a good rally for us. We had spent all Saturday with a deliberate strategy to take things steady and to stay in control of the rally. We didn’t want a repeat of Monte, but that’s exactly what we got. I am so disappointed for the team, for Nicolas, and myself but we have to put it quickly behind us. Tomorrow, we come back under Rally 2 and we’ll go for Power Stage points. We will then fight back again in Mexico.”

A thin layer of overnight snow ensured drivers struggled for grip and Latvala couldn’t match yesterday’s pace. He regretted his decision to carry two spare wheels this morning as Tänak closed in with an impressive hat-trick of stage wins in his Ford Fiesta. “I carried too much weight at the back and lost time in the long corners,” said Latvala.

Freed from opening the roads in the worst of the conditions, Ogier quickly demoted Kris Meeke from fourth. But the Frenchman admitted he couldn’t find the speed he hoped for.

Meeke was a comfortable fifth in his Citroën C3 before sliding off the road and down a small banking in the penultimate test. Fans lifted his car back onto the track but more than eight minutes were lost. "I got caught out on the second run on Vargåsen," said Kris, "the rear snapped away from me coming into a left-hander and I couldn't turn in. We went off the side of the road and got stuck in the snow. Thanks to the spectators for helping us so we could finish the day!

His mistake promoted Dani Sordo into fourth, the Spaniard 25sec clear of Craig Breen. After an error-strewn day yesterday, Breen was mistake-free as his confidence grew ‘step-by-step’ on his C3 debut.

Elfyn Evans was sixth ahead of Hayden Paddon who drove all morning with no power steering in his i20 Coupe. He lost almost four minutes, comparing driving the car to ‘wrestling a 400lb lion’.

Neuville will restart tomorrow in 13th with a 10-minute penalty. 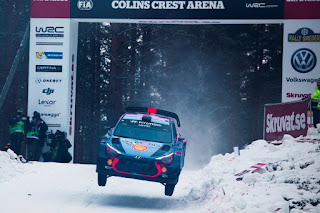