The French get a lot of stick from us about design, but when they get things right, they usually triumph.

For instance, in 1898 Frank Hornby invented Meccano, to the delight of British boys of all ages, but 9 years earlier France erected the Eiffel Tower. Same idea, just different scale.

It’s the same with the Citroen C4 Picasso which I handed back to Citroen just the other day. There were mixed emotions, most of them favourable. The car had a lot going for it, but at one point I could happily have set Basil Fawlty loose on it with his tree branch.

So what drove such a meek, mild and kindly gent like myself to such extreme and evil thoughts?
Full report here:
http://www.jaggybunnet.co.uk/car-reviews/05-dec-citroen-c4-picasso/ 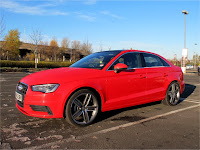 And as for this week’s car, from French flair to Teutonic efficiency? We’ll see.
Posted by John Fife at 15:59