There's a full list of all the principal prizewinners in this year's ARR Craib Scottish Rally Championship listed here:
http://www.jaggybunnet.co.uk/2013/12/30-dec-2013-src-prizewinners/ 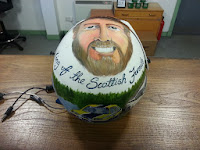 But there's also news of a couple of other 'unofficial' awards including this rather special and unique crash helmet which was presented to a certain rally driver, while the winner of the season-long game of 'Horse' can now be revealed.