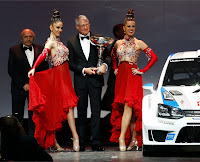 Speaking of glitz and glamour, this is how the French do it. Deputising for the new World Rally Champions, Sébastien Ogier and Julien Ingrassia in Paris at the FIA awards at the weekend, Dr Heinz-Jakob Neußer, accepted the award on their behalf - bookended by a couple of rather striking French 'oiseaux'.  One thing’s for sure, you won’t confuse the FIA event with the MSA’s annual presentation, eh?

And just in case you're wondering where Seb and Julien were, it would appear that the VW team has been testing the 2014 Polo R WRC ahead of next year's World Rally Championship in the French Alps ahead of next month's Rally Monte Carlo.

Testing has been underway on both the uphill and downhill sections of a variety of 1,500 metre peaks with some night driving being included in the mix. Already theVW team has covered some 800 kilometres during the first four days of test driving with Ogier, Latvala and Mikkelsen.