Rally - A strange day out 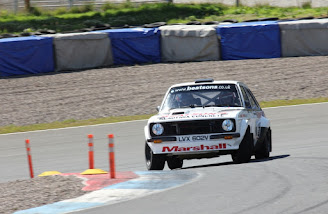 The sound of rally car engines firing up generated excitement and expectancy, tinged with a little bit of nostalgia, they had been silent for over 4 months. As the sun beat down on Knockhill, the tarmac shimmered in the heat with dust spirals swirling off the gravel in the cooling breeze. But this wasn't a rally.

This was a 'Practice Day' organised by Alan Kirkaldy who had hired the circuit and then phoned around to see who was interested. He was a wee bit surprised at the result. Knockhill had allowed a maximum 50 'entries' and although 50 did indeed express interest, 47 actually turned up yesterday to blow the cobwebs out of their intakes and burnish the seized-up rust in their oxters.

Run on a 'Track Day' format, the 47 cars and drivers, had four runs of the Knockhill Special Stage (Track plus Hillside) one way and then 3 runs in reverse direction. There were no Marshals with clocks at Stage Start or Stage Finish and no Timing beams, the cars were just flagged of from a standing start and then waved down with a chequer at the finish. There was no Scrutineering and no Stewards either. Sadly, no spectators. This was a closed-gate event with a limit on numbers attending with the drivers.

Race suits and crash hats were required, but there was no requirement for co-drivers which allowed 'guests' and family members to have a ride in the hot seat.

The result was a relaxed and enjoyable atmosphere although social distancing meant that the usual banter between crews was rather more difficult as folk stood apart and shouted at each other.

The day was well named a 'Practice Day'. Having watched those deprived rallyists it was obvious that some were indeed in dire need of practice, whilst others were there to try new cars, test 'lockdown' rebuilds, or play with suspension settings and just let off steam. 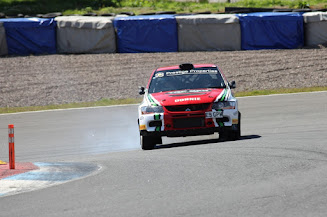 Having accused Donnie MacDonald of showboating the last time he was here, and been criticised for it, I make no apologies for doing so again. Tyre smoke accompanied the Lancer's progress as he braked into the Hairpin, powered round and out of it, using the throttle to steer it. He wasn't alone, Alan 'Drift King' Kirkaldy was at it too, and not just on the Hairpin as a lurid spin on the Hillside early on proved. Greg McKnight was back behind the wheel of his newly finished Mk2 on which he commenced the build some 4 years back! Using Mark McCulloch's 'old' Vauxhall unit, there was still sufficient power to get the tail out and hold it out. And whereas these guys looked mostly in control, Colin Gemmell looked mostly out of control getting the Mk2 up to some wild angles. As expected, the Mk2s of Ricky Wheeler, Ross Marshall, Ross Auld, Kyle Adam, Alex Adams and Brian Watson, were up to similar tricks as was Kieron O'Kane's Opel Ascona.

John Rintoul and Tom Blackwood were the tidiest of the 4WD brigade in their Fiesta R5s as were the Subarus of Ian and Stuart Paterson while Graeme Sherry proved that he is now getting to grips with his recently acquired Subaru.

Stuart Irvine gave his Hyundai Accent WRC  its first run out since he got it and Ross Hunter was trying out the ex-Greg McKnight Lancer which he purchased in Ireland two weeks ago. Well, not exactly it's first run out: "I took it round the industrial estate last night!" said Ross. Robin Hamilton also took the opportunity to try out the historic spec Mk1 Escort he bought from Gordon Boyd with the plan being to keep it for show and use his Talbot Sunbeam on events like the Lombard RAC Rally - when it returns! Another driver who went shopping in Ireland was Jim McDowall. He was there yesterday with the Mk2 he bought late last year with Jamie giving the Focus a run out. That meant Charlotte was back at base running the breakdown business while the boys were out to play!

There was of course much more to see, watch and chat about, but even as a 'non-event', the day out was magic, pure magic. Just one downside - it left us all wanting more. 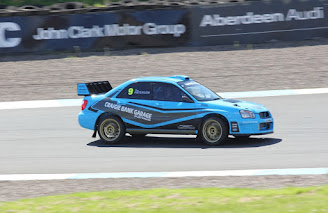 Given the success of the day, Knockhill is giving serious consideration to running more Track Days just for rally cars, allowing them to use both the track and Hillside. If I hear of anything, I'll let you know.

As for the last word, that comes from Ian Paterson, who took Mrs Paterson out for two runs: "That's the quietest Claire has been in the 25 years we have been married," he said. I'll bet she made up for it on the run home, eh? 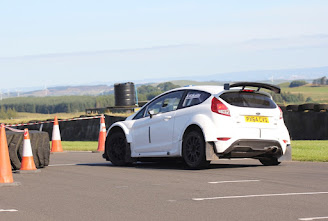 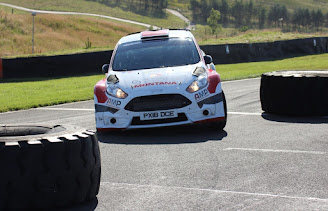 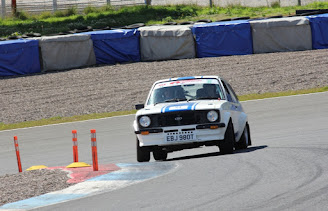 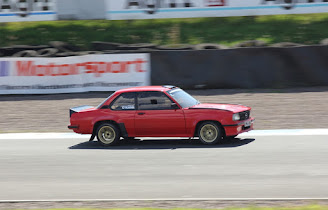