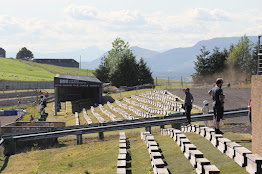 Empty terraces, empty tums and nae tread ... Although those who were at Knockhill last Saturday enjoyed their day out, it was sad to see the empty spectator terraces overlooking the Hairpin. Normally abuzz with chatter and excitement, the place was almost bereft of life under the current Covid19 restrictions.

There was however one bright spot, an abundance of essential supplies from a certain south west bakery firm. Naturally, and purely, in the interests of quality control, they had to be sampled. Empty cake boxes all round. Does a strawberry tart count as one of your five healthy fruit portions per day? If so, then a certain Mr Bunnet will be healthy for a full week! 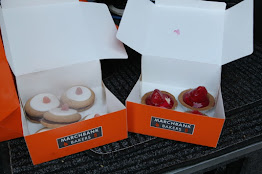 Speaking of the south west, an ex-rally driver appeared as part of The Sheriff's support team. This was the first timeout for the Mk2 and said ex-rally driver was apparently offering some constructive criticism and 'helpful' driving hints to the car's new owner. In return for his pre-rally prep on the new machine, The Sheriff turned to his 'crew chief' and said: "Away ye go an' use up these auld tyres!" And use them up he did!

There was  a healthy turn out of Marshals too and it was good to see some current rally drivers there helping out at the stage finish waving the chequered flag. No doubt the Highland town would have been a quieter place last weekend as the 'Trio from Tain' descended on the Kingdom of Fife. 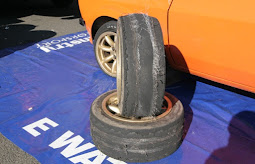 The trio included the driver of a certain black and yellow Vauxhall engined Suzuki and former Subaru pilot now converted to Mk2 runner. They had driven down on the Friday and spent the night in the nearby historic tourist resort of Tillicoultry - on the basis that the name of the place made it sound quite attractive.

The first pub they visited generated the view that: "Some sawdust on the flair would have upgraded the premises," so another hostelry was sought. It must have passed muster, it was sair heids all round on Saturday morning.

And there they were, sticking resolutely to their post, with the sun blazing down on their hat-less, follicly challenged nappers and dehydrated bodies and wishing for some of Knockhill's reputedly cooling rain. You'd think they'd learn, eh?