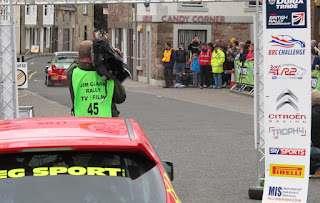 Another 59 folk have confirmed they have completed Transport Scotland's Closed Road public consultation document (see previous Post). That brings the total that I am aware of on this page to 142 who have 'done' it, or in the case of some of our posher readers, have 'completed' it! The appeal of this page is classless, eh?

As yet there is no indication how many other responses TS has received, either for or against, and that figure won't be known till after the process is completed and considered at the end of January.

Yesterday Motorsport UK distributed its December newsletter to competition licence holders and officials  which included the text of their press release regarding the launch of Transport Scotland's public consultation. They also included a direct link to the documents on the TS website so that should further spread the word across the nation and hopefully provoke a few more folk into completing the questionnaire.

However, it's worth bearing in mind that the Welsh Government published its own report on its Consultation findings some 10 weeks after the conclusion of their own consultation process last year, so don't get too excited yet. Apparently, one of the topics which generated discussion was the use of the Welsh language in official documentation. Hopefully we won't have anything like that issue adding to the complexity up here!

When Transport Scotland publish their findings, I'll let you all know the outcome here, so just keep the fiery crosses on standby.

On a more positive note, the final paragraph in the Welsh Government report stated: "A good range of comments and issues were raised and an overwhelming majority of correspondents were supportive of the preferred approach outlined in the consultation document".

By the way, there's also a job advert in the Motorsport UK Newsletter for a new bod at Edinburgh based Scottish Motor Sport, so if you think you're up for it, go for it. Who knows, the position might even take on additional importance if Scotland goes for another referendum! Oh no it won't, Oh yes it might. Exciting times all round, eh?