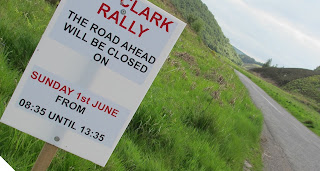 It's nearly 2 weeks (3rd Dec.) since I posted a copy of the Transport Scotland press release concerning the Public Consultation document on Closed Roads on this page and urged folk to get on-line and fill it in.

Since then it has been confirmed that more than 100 individuals who have seen my own on-line articles have completed and submitted the form. And no doubt many more have done so having been urged by clubs and associations.

Even so, the number quoted above already exceeds the TOTAL number of responses that Wales received for their own Closed Road public consultation process. During the period 18th July to 29th August 2017 the Welsh Government received a total of 76 responses.

Amongst those were 5 from Local Authorities & National Park Authorities, 4 from the business sector and 24 responses from 'Motor Racing Organisations'. There were only 39 from individuals, which was a surprise, given the following that the sport has in Wales, eh?

If you haven't done it, or you know folks who haven't, then please make a point of doing so. The closing date is 28th January 2019, and don't go thinking: "Och, that's miles away, that's next year!" Oh no it isn't - it's next month.