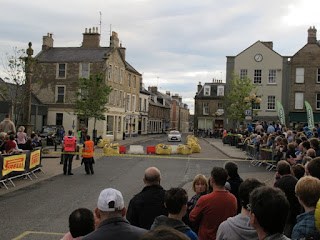 At 16.35 Hrs this afternoon, the MSA issued the following statement after last Friday's meeting regarding the progress of the proposed Scottish 'Bill' to allow motor sport to take place on closed public roads. No other details have been released at this stage, but it is indeed most encouraging to note that a Statement has been issued. At least it gives all rally fans renewed hope for the future of the sport in Scotland, and we only ask that we be kept informed:

... UPDATE ON PROGRESS OF CLOSED-ROAD MOTORSPORT IN SCOTLAND  ...

The Motor Sports Association (MSA) and Scottish Motors Sports (SMS) have attended the second meeting of the motorsports on public roads advisory group in advance of a public consultation on developing new legislation facilitating closed-road motorsport in Scotland.

The findings of any consultation will assist and inform the development of future regulations allowing motorsport to take place on closed roads. It is part of an ongoing process, however all parties are optimistic that the initial public consultation will be published in the coming weeks.

David Richards CBE, MSA Chairman, said: "We are incredibly grateful for the support of Transport Scotland and all the agencies involved at this vital stage of the process. This is a further step towards re-instating some iconic motorsport events in Scotland, that have brought so much to their local communities, whilst providing the potential for new events to join the motorsport calendar in the future."

Tom Purves, SMS Chairman, said: "This meeting was yet another positive milestone with our stakeholder group to help inform Transport Scotland and shape any potential future legislation that offers so much to numerous communities in Scotland, who we hope will soon see similar benefits enjoyed in other parts of the United Kingdom."

The implementation of legislation, first in England and then in Wales, empowered local authorities to suspend the Road Traffic Act for authorised motorsport events and now Transport Scotland are committed to further exploring the pathway to introducing similar provisions through the Scottish Parliament.
Posted by John Fife at 17:22