In photographic terms, this is not a good photograph. A distant and lone Ford Escort silhouetted against the far horizon. But this is not just any Escort. On that basis perhaps this particular photo has more poignancy than the image might suggest.

Jim McRae was at the wheel and the occasion  was the culmination of a Charity Drive. A couple of months back, Jim agreed to help out the pupils at Hamilton College in Lanarkshire who were raising funds for the Vine Trust. On Friday of this week, a party of college students will travel to Tanzania in East Africa to work alongside local people and tradesmen, and with Vine Trust personnel buying construction materials and building homes, and visiting schools to work with children.

Jim put up six drives for auction and raised over £2400 with Knockhill chipping in another £500. Yesterday, the six auction-bid winners turned up at Knockhill where Jim gave each of them a hurl around the Knockhill rally stage and the race circuit - in both directions!

Initially, Jim had intended to use the Ford Sierra Cosworth but the clutch cable gave out after four folk had enjoyed their trips. That meant the fifth chap was going to be disappointed. Initially he thought that he would get his run in one of the Knockhill Rally School cars, which apparently was still more than acceptable given who his chauffeur would be.

But Jim had other ideas. Just like a good Boy Scout, he had brought two trailers with him. As the chap waited for his ride he noticed that inside the covered trailer was a Mk2. "Oh, good," he thought, then he noticed the names on the window and realised this was not just any Escort Mk2. He was visibly moved. He was not alone. Funny that, how a lump of metal, plastic and rubber can generate such emotion.

True to his word, Jim gave the remaining two folk a run in the Escort plus one young lad from the earlier Sierra runs.

By this time, it was early evening. Knockhill was all but deserted, apart from Knockhill instructor and former Scottish Rally Champion Bob Watson who had been left to lock up.

There was just that lasting image of a lone machine on the sky-line and a haunting mechanical melody echoing around the empty hillside. Emotional? Very. Strange, eh? 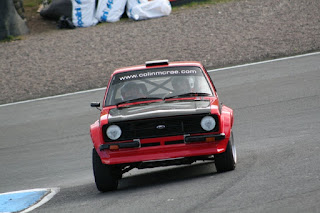