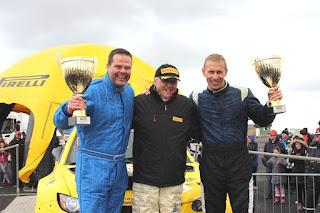 That's the full Entry List for the McRae Rally Challenge and Tunnock's Junior 1000 Challenge now in the on-line mag.

Knockhill Circuit will host the July 2/3 weekend's action and festivities with rally stages interspersed with parades and demonstrations, so a full programme of events is planned to fill the weekend.

Alister McRae and Craig Ritchie won the event when it was last held in 2015, but Alister has swapped his winning Proton for a Hyundai this time, and he has also changed his co-driver in preference for a much younger and prettier one - Ian Grindrod!