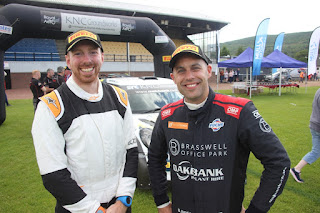 Service crews don't usually get a mention, but the fact that out of 129 starters yesterday, 99 crews recorded a finish is as much a testament to their efforts as those of the two folk inside the car. Some stages during the rally were literally littered with broken and bent motors, but those who made it back to service were mostly returned to battle. Thanks to the almost overlooked heroes of modern rallying.

There was little doubt about the winners though, David Bogie and Cameron Fair  reigned supreme in the MINI, and although David Henderson and Chris Lees in the Fiesta R5 closed the gap to 13 seconds over the final stages, there was little doubt that Bogie had things under control. Although the gap between the top two shown below is over a minute that's because Henderson was penalised a minute for striking a chicane. So too was another top ten finisher Hugh Brunton with Drew Sturrock and quite a few more further down the field. In other words treat chicanes like you would treat your Mum! 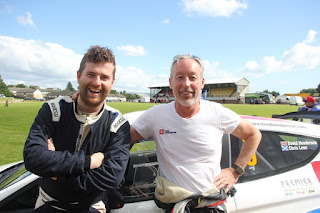 Freddie Milne and Patrick Walsh must have thought they were on for a podium finish. After striking a wall with the Fiesta R5 on the wet and windy Friday night, they fought back in daylight till a puncture on the penultimate stage dropped the Fiesta R5 into the clutches of the pursuit. That meant Rory Young and Allan Cathers must have thought they were in for a shout with the Fiesta Rally2, until that man Binnie fired up the after burner.

In fact, Rory was one of the first to congratulate Michael when the Mitsubishi rolled into the Dunoon stadium finish as he and Claire Mole were declared third overall. "Fair play to Michael, there was nothing I could do about those times," said Rory. 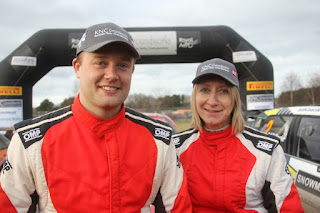 A somewhat subdued Gordon Morrison with Hannah Mckillop rounded off the top six. He felt there was more to come but was lacking confidence in the Fiesta's set-up especially when it landed after some of Argyll's fierce dips.

Another force of nature is Scott MacBeth, as he and Daniel Forsyth recorded 7th overall in the Evo9 ahead of Neil Roskell and Andrew Roughead in their Fiesta R5. Even so, at the finish Neil said: "Loved it - good event, although I had a double puncture on one side of the car which nipped a brake pipe - and didn't realise until I went for the brakes at the next corner!"

With his penalty, Brunton lost a potential top six placing which would have been a superb result considering his lack of rally experience, but drive of the rally? That must surely have gone to tenth place.

I don't know what Greg McKnight has for breakfast, nor Calum MacPherson either, for he must have some constitution to sit beside Greg at full chat. The Escort Mk2 was like a yellow streak of light spearing through the dark greenery of Argyll and will surely make some folk think about tyre choice in future - he was running MRF tyres.

Just outside the top ten in 13th place o/a was second 2WD runner Stephen Thompson  and Larry Higton in another yellow Mk2 - so maybe the colour has something to do with the pace as well! Third 2WD, and in the top 20 overall (19th), was the Peugeot 208 Rally4 of Peter Stewart and Harry Marchbank. Incredible. In this case, Peter's pace might have something to do with 'Marchbank the Baker's' pies or empire biscuits! I have road tested both.

Full report in Thursday's Motorsport News with the usual longer report in the on-line mag after that.