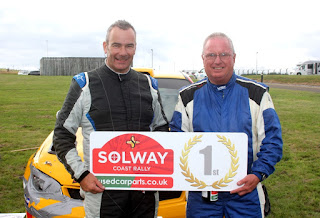 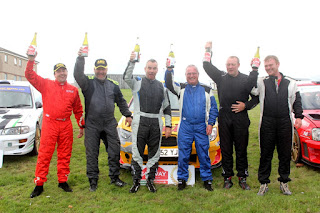 Normal service? As ever, the phone signal was virtually non-existent at Dundrennan for this year's usedcarparts.co.uk Solway Coast Rally, and when there was a signal it was intermittent. Halfway through a post to the internet and it would disappear. Frustration can be measured in so many ways, swearing, cursing, anger or the more acceptable form of reaching for some of Marilyn McMath's succulent and soothing tablet. Such sweet nectar! As ever, the Solway CC ladies had laid on an array of tempting treats at Signing On for the masses before the real action got underway.

This year's event started with a bang. Several in fact. Courtesy of some damp moss covering the tarmac and hidden in the shadow of some trees. Mark McCulloch was first to find it, when he skelped the Subaru against a tree, followed in quick succession by Stephen Thompson and Ian Paterson. Three out before the rising sun had time to blink. Hardie didn't get away scot-free though. There was a wee twinkle in his eye as he taped up the front o/s corner of the Subaru. Luck or skill, you decide?

Lee Hastings (somehow) managed to avoid contact with the scenery and finished a fighting second overall whilst fending off Gordon Morrison. In fact just 4 seconds separated 2nd and 3rd places.

Ian Forgan had an excellent run into 4th place with Bob Adamson scoring the best result of his career in 5th while John Marshall rounded off the top six.

Once again, the under 1600s were giving a fair account of themselves  with two in the top ten by the finish. Stewart Dodds flew his 1400 Nova into 9th place just ahead of the 1600 Citroen C2 of Michael Harbour.

Ray Cunningham won the Historic Rally in his Mini Cooper S from the similar car of Clive King while Paul Kendrick's Mk1 Escort was third.

There will be detailed report in Wednesday's 'Motorsport News' of the Solway extravaganza with a comprehensive round-up of proceedings later in the week in JB's on-line mag.