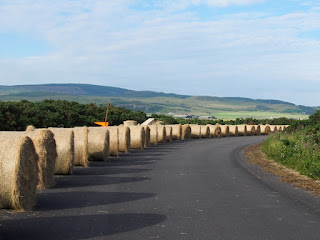 It was my turn for a column in this week's Motorsport News (out tomorrow). The deadline is always the Sunday night before the Monday printing date, so naturally the column was written and ready to go before I left home for Campbeltown on the Friday. At the last minute, I changed it late on Sunday night, and wrote something else which was inspired by events at last weekend's Mach1 Stages Rally and the previous weekend's F1 showpiece at Silverstone.

Early on Monday morning I checked the overnight email to see if the column had been rejected, or if there were requests for changes, or intimation that some editorial changes had been made. Nothing. That's either good news or bad news. I'll find out tomorrow. And maybe I'll publish the full article here in due course.

Anyway, I reckon Formula 1 is no longer a motor sporting spectacle, it is purely showbusiness, with the emphasis on 'business'. It has about as much in common with 'sport' as a vegan has with a Scotch pie.

So what had I planned for tomorrow's column? Well you'll just have to wait for the next one. That is, unless I have another last minute change of heart again.

There will also be a report from the Mach1 in this week's paper with Jaggy's on-line mag carrying its usual more extensive and detailed report later this week.
Posted by John Fife at 15:17