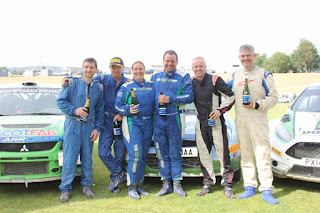 Well that was a tough old day. Argyll at its finest, fastest and toughest. Going into the final stage of the Dunoon Presents Argyll Stages Rally, Andrew Gallacher had a 4 second lead over Donnie MacDonald. After 7 stages of twisty, technical stuff, the final six miler was fast and flowing and this is where the winner would be decided.

MacDonald drew up to the start line, waited for the countdown and went on the green. The Ford Fiesta R5 stalled: “That’s the first time I’ve done that,” said Donnie, “stalled on the start line. It cost us 7 seconds.”

Behind him in the queue was rally leader Andrew Gallacher in his Ford Focus WRC: “I was sitting there counting his seconds too,” said Andrew, as he took his turn to move up to the stage start line, and waited for the green light, “then we had a misfire! It cleared quite quickly but my first thought was ‘what the flip’s (not an exact quote!) going on’ but I thought I’d either see Donnie in a ditch or setting fastest time. Then I saw him waiting for me at the stage finish line.”

The winning margin was 5 seconds – in Gallacher’s favour, his first win since the Snowman Rally four months ago.

Bruce McCombie completed the podium line-up in his Mitsubishi Lancer, but only 2 seconds behind him were Freddie Milne and John Wink tied on times for 4th with Freddie getting the nod courtesy of a faster time on the opening test of the day. Michael Binnie rounded off the top six.

In a day full of drama and incident, it all kicked off on the first stage when pre-rally favourite Jock Armstrong slid wide on a long, long left hander on the very first stage smacking the nose of the Subaru hard. Mark McCulloch’s run of bitter luck continued with more steering trouble in the Fiesta and he cowped it in the first stage. Not to be outdone, Rory Young slid off the road when his Fiesta suffered a double front puncture.

Top 2WD runner was Greg McKnight finishing just outside the top ten in his Mk2 with Paul McErlean 2nd ahead of Keith Riddick once again putting in a stirring performance in his 1600cc MG.