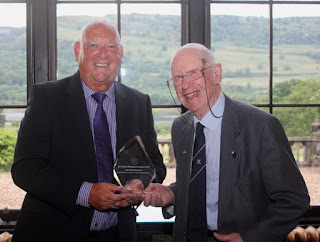 Ian Scott-Watson is the latest recipient of the annual Jim Clark Memorial award  as chosen by the Association of Scottish Motoring Writers.

The presentation was made at a private celebration in the Mar Hotel on Saturday evening where journalist and author, and ASMW member, Eric Dymock paid tribute to the foresight, support and enthusiasm of Ian Scott-Watson.

It was entirely appropriate that in this 50th anniversary year of the loss of one of the world's greatest motor racing drivers that the ASMW chose to commemorate one of Scottish motor sport's lesser known heroes.

Indeed, it was Ian Scott Watson who first spotted the young Jim Clark's talent and potential. Not only did Ian initially lend him his own car to go racing, an 896cc DKW Sonderklasse with all of 34bhp, he helped finance subsequent racing machines which launched him on to the British and World stage.

That was in 1956 and just two years later both Clark and Scott-Watson were invited to join the Border Reivers Racing Team, Ian as team manager and Jim as driver for their new D Type Jaguar. It's now a matter of record that Clark became the first driver to win a UK sports car race at Full Sutton in Yorkshire at an average speed in excess of 100mph.

Less well known is the fact that Ian Scott-Watson was not only a founder member of the Scottish Motor Racing Club, but he was instrumental in creating a motor racing circuit at the Royal Highland Showground at Ingliston.

He had originally been working on plans for a brand new circuit at Polkemmet, but through no fault of his own, the consortium behind it were unable to complete the deal. Apparently the Scottish Coal Board owned the mineral rights to the site and refused to confirm that they wouldn't suddenly appear at the circuit and start digging holes!

At that point Ian took matters into his own hands and within three weeks had contacted the Ingliston site's owners and using the established tarmac road network and showground stands created Scotland's first 'custom built' race circuit.

It's also worth noting that amongst those early Ingliston racers was the winner of last year's Jim Clark Memorial Award, one George Franchitti Esq. And we know what that led to. 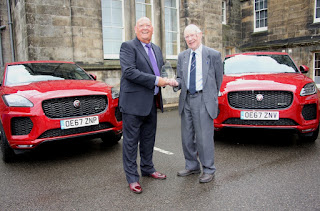 In recognition of his Border Reiver exploits with the D Type Jaguar this year's award function was sponsored by Jaguar Land Rover amongst whose guests was another former Jim Clark Memorial Award winner, Jaguar's chief designer, Ian Callum.

ASMW President John Murdoch presented the award to Ian who then regaled his audience with a remarkable collection of anecdotes from those early days. It was indeed a celebration to savour and a night to remember.
Posted by John Fife at 17:56