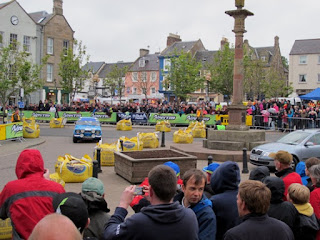 The news that the subject of 'Closed Roads' is back on the political agenda is indeed most welcome, but there is still no indication of how long this process will take. So don't go getting your hopes up.

Public Consultations can last weeks or even months, which isn't helpful to those clubs who want to organise events. Especially when such events take over 12 months to plan and Road Closure orders have to be requested 6 months in advance of any proposed date.

As yet we don't know when this public consultation will commence. Then of course the findings will have to be presented to Government. Once it is in the hands of politicians it could go either way depending on the political will of our masters - quick and easy or slow and ponderous. And still no assurance that we will get what we want! The trouble is, should any other 'more important matters' arise during this process, our wishes will be shoved further down the 'to do' list.

The good news is that the civil servants within Transport Scotland who are leading this legislation change/adoption appear to be quite positive and supportive. Also, Scottish Transport Minister Humza Yousaf met with senior figures within the MSA a couple of weeks back and he voiced no objections at this stage.

So far, so good. However, now that the process is underway we NEED to be kept informed of progress,  or lack of it.

Since the FAI concluded its business last year we have heard very little through official channels. Once the FAI recommendations had been accepted, the impression was given that it would be a simple matter to get the show back on the road. Either by changing the existing Scottish legislation or adopting the new English/Welsh legislation, although it does look as though this second option is the preferred choice of action.

Since then, very little has seeped out about official progress until now. This news vacuum has created false hopes and generated much speculation. Much of this ill-feeling and dis-content could have been averted by regular updates on progress, or even lack of it,

I don't believe in the old adage, 'no news is good news'. Any news, good or bad allows those hearing it to make decisions. It's not knowing that causes unrest and dis-satisfaction. On that basis we should be kept informed.

These discussions and negotiations will no doubt be conducted in private, and that's fair enough up to a point. but the procedures should be explained. For those of us who are interested in the democratic and legal legislative process being conducted on our behalf by those who represent us and are paid by us, it is not too much to ask, is it?

At the present time, such lack of knowledge hinders those planning their family holidays next year, or take time off work to contest an event, or officiate and marshal on it. Similarly, rally fans and followers can't plan ahead either, let alone the amateur clubs and organisers who face the gargantuan task of organising a major event.

Then of course there are the local businesses who will feed, fuel and house the invasion and flog them porridge and pancakes, burgers and pies, tablet and shortbread, and of course, deep fried Mars bar and chips.

So fingers crossed. Things are moving, albeit in 1st gear at present, but at least we're not parked up in a field, spinning our wheels and going nowhere. If this is going to take a year or two years, we need to be told.

That means there will be no closed road events in Scotland this year. And if there is to be any hope of an event in May next year then we have 6 months starting from now to get this legislation approved and passed. Meantime, if I find out any more, I'll pass it on.
Posted by John Fife at 15:23