Rally - Tribute to a legend 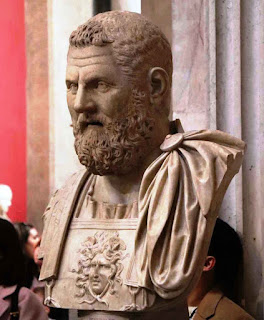 This fotie was sent to me by a good pal, a former editor of one of Lanarkshire's finest news weeklies, and who now resides in France somewhere near Englandshire. Apparently George was on a cultural visit to the Vatican, for reasons known only to himself, where he chanced upon a bust of a celebrated Roman general and was immediately struck by the likeness to one of Scottish rallying's best known characters.

Here at last was proof that the Romans did indeed visit Scotland in the days long before the automobile, railways and bus replacement services, although it has to be said that they got no further than the Antonine Wall at Stirling. Apparently this General was stationed at a Roman Camp somewhere in central Lanarkium called Coltnessium on the banks of the Aqua Clydeicus.

Now, I kid you not, the inscription on the plinth reads as follows:
" My name is Jamesimus Scotus Brownius, Commander of the Bears of Coltness, General of the Marshal Volunteers, loyal servant to the true King of Scotland, Jamesimus McGreaticca the Rallyist. Driver of a murdered Saab, sufferer of desecrated cooking. And I will have my vengeance, in this life or the next. "

An uncanny likeness to his descendant, eh?
Posted by John Fife at 14:40