The TV pictures coming out of Sweden at the weekend proved one thing. Despite the FIA's best efforts, world rally cars just keep on getting quicker. Looking ,more like turbocharged demented Dysons rocketing through the Swedish forests, the speeds were breathtaking. Even just sitting in an armchair watching drew stomach churning, great gasping intakes of breath. It's when you're watching such speed and skill being demonstrated like this that you realise why the debate between who are the world's best drivers - World Rally drivers or F1 pilots continues year on year.

Once again the star on stage this weekend was Ott Tänak winning the second round of the FIA World Rally Championship by 53.7sec In his Toyota Yaris. A star in the making is surely early rally leader Teemu Suninen who lost the lead when he spun and then later smacked a tree hard enough to bend the Fiesta's roll-cage, but his pace was quite incredible for such a newcomer to WRC machinery.

As only the fourth non-Scandinavian driver to win the championship’s only pure winter rally, Tänak dedicated his success to mentor and fellow countryman Markko Märtin: “I know how hard my very good friend Markko was pushing to win here in Sweden and he was once very close. So I’m happy that we finally did it and we have this win in the team now.”

There was a massive four-way battle behind for the remaining podium places, but a determined drive in the final kilometres secured 2nd for Esapekka Lappi by 4.4s over Thierry Neuville.

Thierry Neuville was 3rd just 3 secs behind and thankful to have survived a huge fifth-gear spin on Friday when he almost rolled. Andreas Mikkelsen finshed 4th just 2.8 secs ahead of M-Sport's Elfyn Evans who commented: "We’ve had very good speed for the most part of this weekend. I would say that we can be happy with 75 percent of the stages we did, but I’m just kicking myself about the other 25 percent which didn’t go quite as well as they should have. We had the potential to be on the podium so we are left with a little bit of frustration, but there are still a lot of positives. We’ve made a massive step with the car compared to last year and we already know that we’re competitive on gravel so I’m really looking forward to the upcoming events.”

Kris Meeke completed the top six in his Yaris. “On the Power Stage I had a big impact on the front-left and I struggled after that. The mild temperatures this weekend have been so different to my pre-event test and I've lacked some speed as a result. But it's good to get to the end and score some points for the team.”

Gus Greensmith had another good result in his Fiesta R5 finishing 3rd in the WRC 2 Pro class and 19th o/a: “The pace wasn’t where I wanted it to be, so we just had to keep it on the road for both the manufacturer and driver championships. In that sense the result was good and we scored some good points, but we still have a lot to learn and improve on snow.”

Other Brits who did well were Rhys Yates in 25th and Tom Williams 34th o/a.

Apart from the sheer speed, Rally Sweden highlighted another issue that rally organisers around the world are struggling to deal with - spectators getting too close to the action. Some eedjits are not just putting themselves in  danger but also the crews inside the cars. What conditions proved at the weekend was that when a car has to change line mid corner it can easily break traction. And despite the best efforts of skills and studs, cars can assume a mind of their own.

Then again, when a car goes off there does seem to be a natural compulsion to get down off the banking and help push the stricken crew back on to the road or in extreme cases, help them out of a crashed car.  That is a much more difficult thing to control and manage. 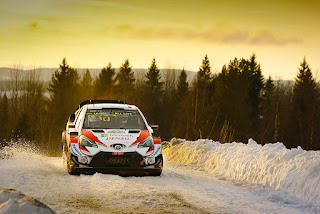