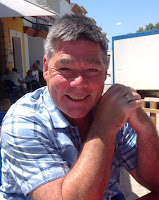 Scottish rallying was stunned again last week when it learned of the tragedy which befell Robin Laird. The death of the popular co-driver at an accident at home while working on his car shocked all those who knew him, and a minute's silence was held before the start of yesterday's Kingdom Stages Rally at Crail.

Like many people who didn't know him well, I thought he was a quiet, serious bloke, but there are many who know better including those who gathered regularly at the 'unofficial' SSCC club gatherings at Davie Cochrane's house where apparently cans of McEwen's and 'aperitifs' of vodka invigorated the chatter while playing video games or watching rally films.

I did however get an insight into his character a few years back when I turned up at Glasgow Airport for a private charter flight to head off to some exotic location for a new car launch. I didn't know that Robin was a Flight Operations Officer at that time, but I immediately recognised him when he bustled into the lounge to shepherd the gathered throng amongst whom were some of the more worldly experienced, top motoring writers representing some of the big newspapers, radio and TV outlets - and me.

Robin recognised me too, and with a wink singled me out as a VIP loudly welcoming me back (!) as if I was a frequent flier and a regular Business Class client using private charters. I got the full treatment with Robin apologising for not having the usual host of comforts (!) as befitted a person of my importance and that he had advised the flight crew that I was amongst the passengers again (!) and all of this played out with a straight face.

Robin had also tipped off the flight crew that I was a 'friend' and the special treatment continued all the way with free drinks and luxury catering courtesy of my presence (it wasn't, it was the private charter company's usual fare) and a personal visit to the flight deck.

Well, that caused quite a stooshie amongst my more exalted colleagues and all the way out to Crete, the whispers were - "Just who is that guy?"

We had a good laugh about it at the next rally we met as I filled him in on what was being said behind my back.

This was not out of character, Robin enjoyed a laugh and a joke as much as anyone and was often the instigator of such antics when the sport was finished for the day and some relaxation was called for.

He'll be sorely missed, not only by us all in rallying, but more importantly by Fran, his partner of 22 years, and Jaimie.

The funeral service will be held at Woodside Crematorium, 46 Broomlands St, Paisley PA1 2NP, on Saturday 12th November at 11:00.
Posted by John Fife at 12:33