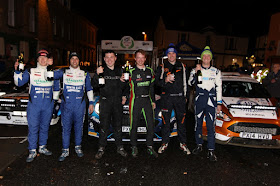 The record books will record the facts that Josh Moffett and Andy Hayes won this weekend’s Jim Clark Rally in Duns while David Bogie and Kevin Rae were second and Dale Robertson and Stuart Loudon were third. That is fact. What they might well fail to record is the emotion.

There was just something a wee bit special about the whole week leading up to the event.

Anticipation, excitement and of course a little bit of nervy tension, and then there was the event's first stage. On Friday afternoon a Mk2 Escort whupped the world cars. What a way to open the show. Bogie's scintillating flight over the 8 mile wet and slippery Abbey St Bathans stage was mesmerising. Surely the clocks were wrong. Nope. Moffett was 5 seconds down.

Another surprise. First time in an R5 car Robertson was second equal fastest with the Irishman.

Of course, the natural order was restored on Saturday. Moffett snatched the lead through Langton and eased his way to victory, but that was it. There was no way Bogie was letting anyone else past him. Of course this is no ordinary Escort, but still, pushing over 300bhp through two rear wheels in the dry is one thing, but when conditions, are wet, puddled, muddy, and very muddy, that's something else. Add in a bit of ice on Saturday morning and the ice coming back Saturday night and you had textures on tar that would make a bog snorkeller wince.

So whilst Moffett sailed serenely on, the battle behind became quite frantic as Hugh Hunter poked his Focus WRC's nose into third place then overtook Robertson and by stage 9 had displaced Bogie who had dropped to 4th at one point before fighting back to 3rd.

Then came the Bogie magic. On the final stage, he set fastest time over a slimy, freezing, mud-topped tarmac Fogo to re-take second from Robertson as Hunter was just too cautious in those terrifying conditions and dropped back to 4th. At one point Alan Kirkaldy was threatening the top four but the Fiesta bashed a bale and clattered a dyke. That did for him. John Indri was another to fall foul of the treacherous conditions, rolling the Mirage.

That wasn't all. Throughout the field there were surprises, shocks and sterling performances. Also first time out in a Fiesta R5 was Ross Hunter (no relation to Hugh!) and he finished 5th overall ahead of the Mitsubishi Lancer of Michael Binnie. The Fiesta R5s of Andy Fenwick and Steve Simpson were 7th and 8th ahead of the mighty impressive Mk2 of young James Ford in 9th place. And had Gordon Morrison not wet his Fiesta's breeks in the Langton Ford he might well have done a lot better than 10th overall.

But forget all the fancy tackle at the front. The star of the show finished 11th overall. lf Red Bull gives you wings, what the heck was Dangerous Des on? Des Campbell and Craig Forsyth finished a quite incredible 11toverall in a Peugeot 206 that was probably worth less than the tyre bill for the front runners (OK, that's a wee bit of an exaggeration, but you get my drift). The wee car danced through the stages, skipped over the puddles and delighted the spectators. Marvellous, simply marvellous.

That summed up my weekend. Standing there in the town of Duns on Saturday afternoon listening to the sound of distant rally cars with flat-shifts chattering like a Vegas slot machine rolling across the Borders hills was spine tingling and then as night closed in and the sound carried further through the still, damp and cold air, it was as if a pack of growling wolves were circling the perimeter of the town fending off vampires, zombies and other ghosties to protect the townsfolk from evil.

(Note: There will be a full (and more sensible) report - and a Column! - in next Wednesday's Motorsport News after which a more detailed report will be published in the on-line mag.)